Some of the coolest, most beautiful things to be seen in the woods are also the most inconspicuous.  Take bishop’s cap, for example.  You could completely be forgiven for walking past this stalk of tiny, unobtrusive white flowers without giving it a second look. 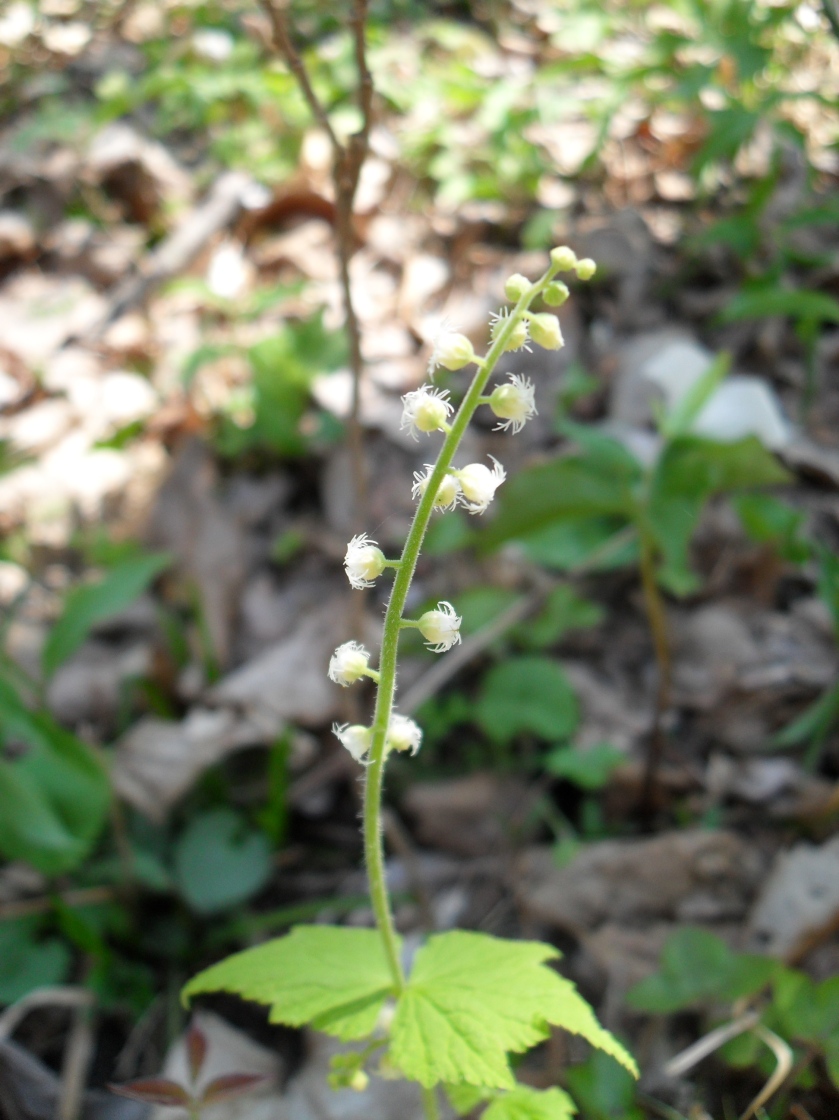 But bend over and look more closely.  The flowers may be small, but they’re exquisite, like snowflakes.

And hey, is that a flower peeking out from under this whorl of leaves?

It’s a nodding trillium!  I had never seen one until this spring.  I don’t know if we didn’t have them in the part of the state where I grew up, or if I just wasn’t looking.  Either way, imagine me lying on the ground, stretched out on my side, to get a good shot of this downward-facing flower; it’s a good thing no one else came along on the trail just then, but it was worth it!

I love wild ginger, another plant with a spectacular but easy-to-miss flower.  These pairs of heart-shaped leaves are everywhere right now. 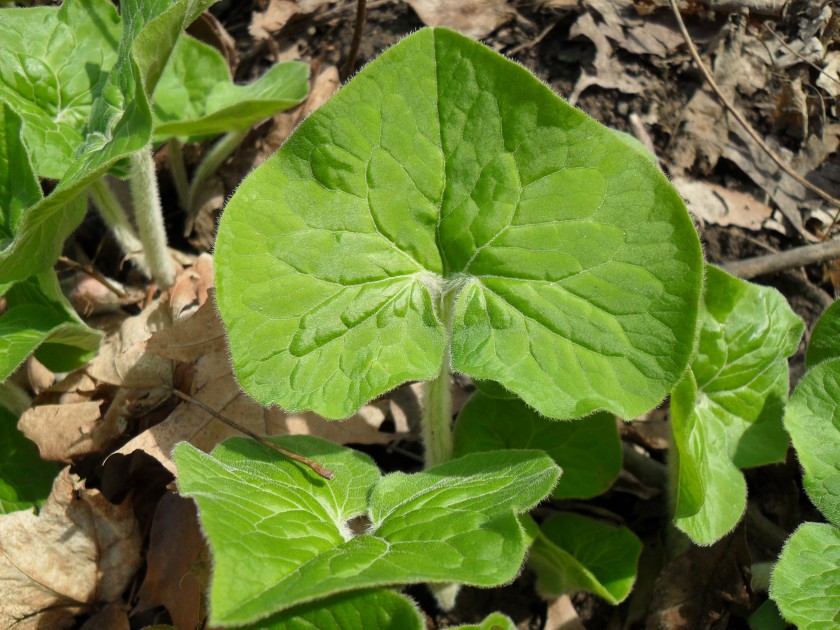 You have to check the base of the stem to find the unusual purplish-red flower.  Why such an odd flower in such an odd place?  It’s pollinated and dispersed by ants, that’s why!

I love how spring happens in tiny increments.  This week the snakes suddenly woke up and were everywhere; no one had seen a single one until Tuesday, when suddenly every trail group was coming back talking excitedly about garter snakes and water snakes and black rat snakes.  Hooray herps!  Yesterday morning I heard the first towhee song of the season (drink your teeeeeaaaaaaa!).  And of course, the wildflower bonanza is ongoing – the spring beauties and yellow violets are going nuts at the minute, and the jack-in-the-pulpits and wild ginger and white violets and phlox are getting started… I could go on, but I feel like I need to post something other than just lists and photos of the wildflowers blooming here, as much as I love them.

There’s a whole southern part to this property that I really have yet to explore at all, so this afternoon I decided to hike to the covered bridge and back, somewhere I hadn’t been yet.  There were a lot of sessile trilliums (Trillium sessile, a.k.a. toadshade, a wonderful name) along the trail, which don’t have the big white open flower you probably picture when you think of trillium, but they still have that whorl of three leaves.  Here’s a normal sessile trillium.

See?  Three leaves, three sepals, three curled-up reddish brown petals.  That’s where the “tri” in trillium comes from, after all.  But a little farther down the trail I found this bizarre creature: 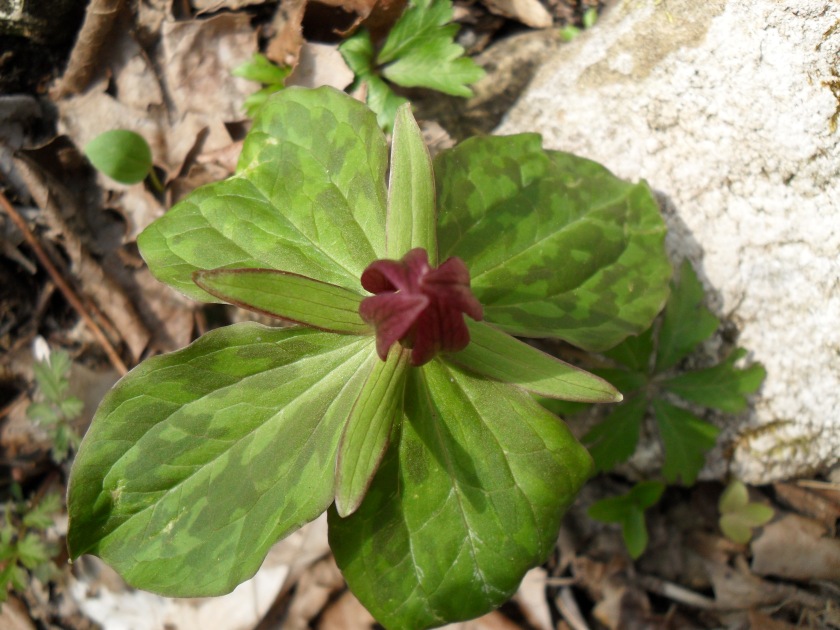 There were also lots of these long-stemmed leaves around.  Can you guess what they are? 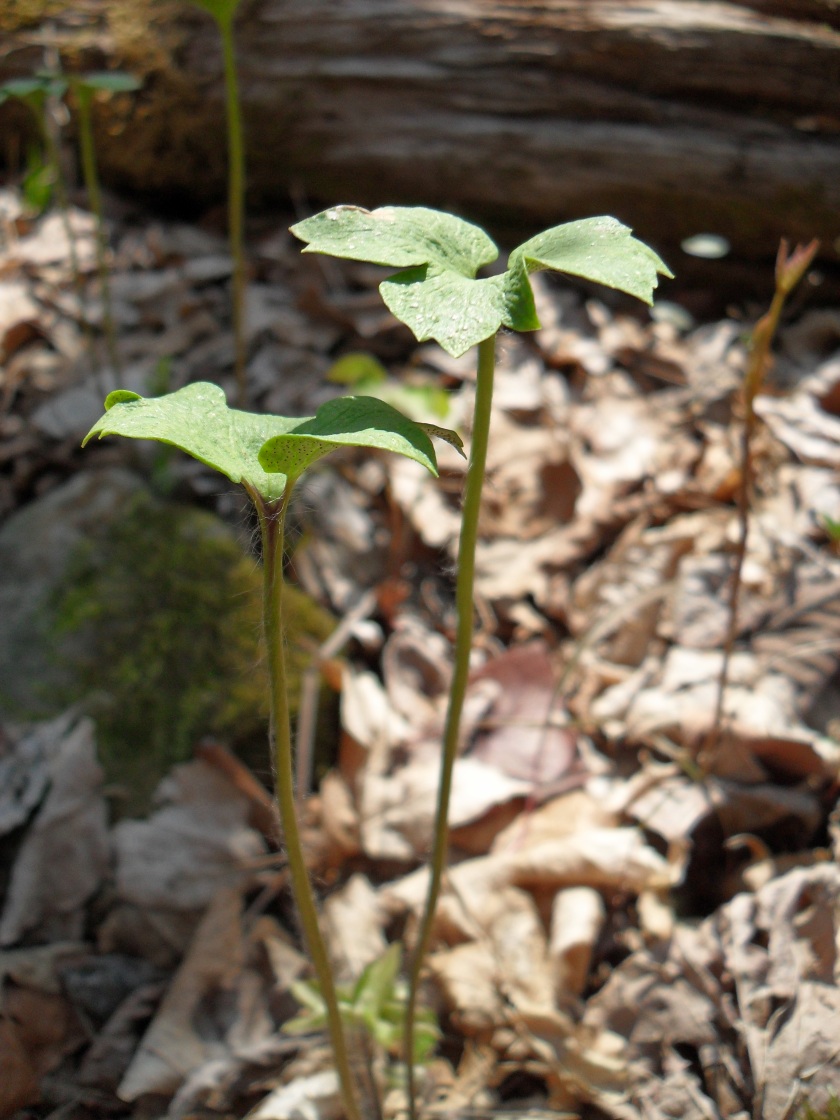 They’re hepatica!  Normal hepatica leaves hug the ground pretty closely, but the plant can get infected by a rust that causes them not to flower and instead shoot up these tall, thin leaves.  Then flies land on them and “mix the gametes around,” to borrow some technical terminology (ha ha) from a botanist I know.  Don’t worry, though; as far as I know this rust is a native disease, as normal and natural as the flowers themselves, not something exotic that’s going to wipe out all the hepatica in North America.

Eventually, following my trail map, I arrived at a perfectly normal, modern bridge where a local road crossed the creek.  Not a picturesque old covered bridge.  Had I been tricked somehow?  Eventually I realized that I just had to cross that bridge and pick up the trail on the other side, and the actual covered bridge was just a bit farther down.  It was lovely (despite the graffiti), an old, barn-red structure flanked by enormous gnarled sycamore and osage orange trees.

Anyway, I completed my Red Cross certification in Wilderness and Remote First Aid yesterday and now hypothetically know what to do in the event of a sucking chest wound in the middle of nowhere, which makes me feel very competent and outdoorsy.  Hope everyone else’s weekend was as productive and gorgeous as mine!

I went back out on the trails yesterday to photograph some of the wildflowers I’d found and ended up finding even more.  Blooming in our woods at the moment are:

Additionally, the mayapples are up!  They won’t bloom for another month yet but I love them for the way they appear everywhere almost overnight, like little green umbrellas unfurling from the ground.  Wildflowers – finding them, identifying them, photographing them – are definitely addictive.