There are hops plants in containers in our yard. The person responsible for said plants (not me) is rather invested in their well-being and regularly examines their leaves for any sign of disease or other problems. Recently he found these:

Insect eggs! But what sort of insect eggs? Something that would munch on the hop leaves and damage the plants? Luckily it wasn’t hard to figure out the answer, because the culprit was still nearby.

This was last week. When I checked back this morning, the eggs had hatched and the plant was crawling with tiny, spiky ladybug larvae. And also with aphids. But at least there are baby ladybugs around to eat the aphids, right?

I’m not sure whether these are a native ladybug species or an Asian one; I know you can tell by the face pattern, but the photo of the adult ladybug isn’t clear enough for me to be sure. In any case, it’s fun to be able to watch their life cycle. I’ll have to check back and see if I can find pupae later on.

UPDATE: I did keep checking but apparently missed the pupae – after forgetting about it for several days, I took a look at the plant and there were no remaining ladybugs (at any stage of their life cycle) to be seen. Oh well.

One day last week a woman came into the office carrying a cardboard box and asking if there was a biologist around.

Last time something like this happened, the box contained a baby bat, but thankfully this time it was just a mysterious insect nest… thing… on a pine branch. I’m more or less the closest thing to a biologist in our office, so I took a look. I had no idea what it was, but I was pretty sure I could find out, and I used my phone to take a couple terrible photos.

Then, I turned to the number one tool of a naturalist in need of ID help: Twitter.

The lady who brought in the mystery object in my last 2 tweets thinks it's a "spider nest." Thoughts? @derekhennen @BioInFocus @AndyBugGuy

@BioInFocus @rdeatsman @derekhennen Photo not real clear to my eyes, but is the exterior covered in frass?- that's kinda how it looks

@AndyBugGuy @BioInFocus @derekhennen Now that you mention it, I think it was, yes. There's also silk-type stuff (thus "spider nest").

@rdeatsman @BioInFocus @derekhennen Then likely a pyralid related to the Pine Webworm. Not sure which species off the top of my head...

Yup, I took shameless advantage of my entomology contacts on Twitter – again – and in less than forty-five minutes I had an answer. This is a nest built by the caterpillars of a pine-munching moth, and that stuff it’s made of is frass, or caterpillar poop. The next day I ran into the woman who’d brought it in and told her, and she was very interested, if a little repulsed.

My boss and I pulled into a parking space outside our office. As she noted the mileage, my gaze drifted up, through the windshield and up into branches of the boxelder tree above. “Huh,” I said. “A hornet’s nest.”

She looked. “Oh, that’s a nice one. We should take it down and bring it into the office this fall once they’re done with it.” That’s the kind of place I work.

These are, of course, Bald-faced Hornets, Dolichovespula maculata. I used my telephoto lens to get pictures from the ground without bothering them – they can be aggressive if you disturb their nest. The papery structure is made from chewed-up wood, and is subdivided into cells inside like a beehive. They raise their young in it and then abandon it in the fall. Live and let live, I guess. We’ll let them do their thing and in a few weeks they’ll be gone.

Yesterday this innocent-looking white butterfly landed on a coworker’s hard hat and I made her stand still so I could take a photo before it flew away.

This is a male Pine Butterfly, Neophasia menapia. I first became aware of their existence shortly after moving here, when I noticed a brochure tacked up on the wall at my office – an update from the previous year on a Pine Butterfly outbreak in the local national forests. Like many butterflies, these are tied to a specific plant to complete their life cycle – in this case, their caterpillars feed on the needles of Ponderosa Pines and Douglas-firs. Unlike many butterflies, they occasionally have large outbreaks that can damage forests, which happened here last year. (Incidentally, the Forest Service brochure reassured anyone reading it that despite the damage “…they are not ‘eating all the trees,'” and I felt like those quotation marks conveyed a lot of frustration and weariness on the part of the Forest Service staffer tasked with educating the public on this issue. Doubtless he/she had fielded a lot of phone calls from people demanding that the agency do something about those butterflies eating all the trees.)

Anyway, I’m not used to thinking of butterflies as pests, but people around here who know almost nothing else about butterflies seem to know that white butterflies eat pine trees. (I’ve already found myself explaining at least once that no really, there are a lot of different kinds of white butterflies and only one actually eats pine trees, so please, please don’t just smoosh any white butterfly you see). The outbreak has died down somewhat since last year, and today was the first time I’d actually spotted any of the butterflies in question. It got a fair amount of media coverage at its height, though, including this great NPR piece complete with video of the butterfly “snowstorm.”

I looked briefly for any signs of eggs or caterpillars on the needles of the trees around us, but without time for a more thorough search I wasn’t able to find any. In any case, like so many things in nature, these insects are a little more complicated than we might like them to be. Butterflies are nice, pests are bad – which one is this?

Work on Thursday found me hiking up a steep trail in the North Fork Umatilla Wilderness (part of the Umatilla National Forest) in the company of a pair of teenage boys. We were supposed to be collecting data on campsites within the wilderness area, but we didn’t find any campsites. Instead we found a pair of colorful moths engaged in the all-important pastime of making more moths. 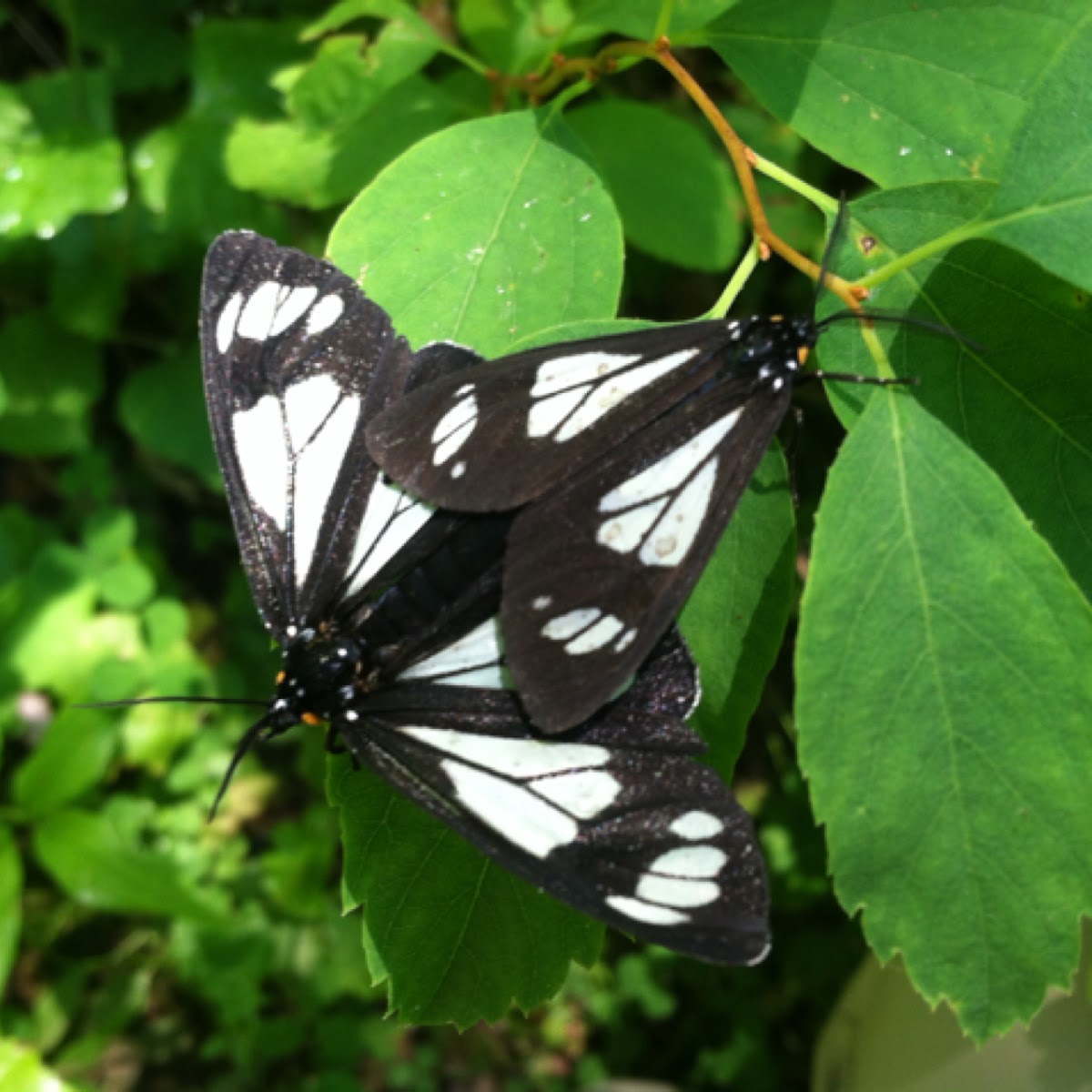 I pointed them out to the boys (I’m experienced enough with adolescent males at this point to know that “things having sex” is a pretty surefire way to get them to pay attention to nature, as is “things you can eat,” which is why I also introduced them to thimbleberries). I also took a couple photos with my new toy, the iPhone I finally broke down and bought when I learned what happens when you accidentally set a hot frying pan down on top of the cord for your phone charger, and then learned that my old flip phone was so old they didn’t make new chargers for it anymore.

I’ve been posting spottings to Project Noah via the website for a few months now, but now that I had a smartphone I was eager to try out the app and cut out the step of having to download photos from my camera onto my computer before posting them. I’m determined not to become one of those people who constantly has her nose buried in her phone, but when we stopped for a break at the top of a ridge and I realized I had a couple bars of service, I started filling in the required information about our horny mystery moths on the app. “You have service up here? What are you doing?” the boys asked, curious.

“Well, there’s an app for, uh, people like me who are nerds about nature stuff, where you can post your photos of bugs and plants and whatever. So I’m posting those moths. Maybe someone can tell us what they are.”

“What, and you get likes and stuff? It’s Instagram for plants!” crowed one of them. “It’s Plantstagram!”

“Well, sort of, but it’s more than that – I mean, scientists can see what species have been seen where and–”  Their eyes were already glazing over. “Sure. Planstagram. Exactly.”

By the time we got home a helpful Project Noah user had already identified the moths as Gnophaela vermiculata, with the charming and descriptive common name Police Car Moth. The timing was perfect, too, since this was National Moth Week.

Anyway, I think I like my toy. And if you’re a Project Noah user yourself (and if you’re not, you probably should be), you can follow me here.

The two butterflies on this yarrow flower head are Blue Coppers (Lycaena heteronea, not to be confused with Blues, which are a different but very similar-looking group of butterflies). The one with its wings spread, showing off the blue color, is a male, and the one in the back is a female.

I watched the male chase the female back and forth across the flower for about a minute. She didn’t seem to want anything to do with him.

I know this is probably the most blatantly anthropomorphic post I’ve written in a long time, but who could resist imagining bad butterfly pick-up lines.

Last week I snapped my first photo of an Oregon butterfly.

Handsome creature, isn’t it? I recognized it as some sort of checkerspot, a group of butterflies I’m not very familiar with, and figured I would identify it to species using my field guide when I had a chance. However, as sometimes happens, this turned out to be more complicated than I expected. The best match in my book was the Variable Checkerspot, Euphydryas chalcedona, but none of its illustrated, er, variations perfectly matched the patterns of colored dots on the wings of the butterfly in my photo. Luckily, thanks to the wonders of Twitter I recently “met” a lepidopterist who used to do a lot of collecting in this part of Oregon, @AndyBugGuy. I tweeted the photo for him to see and he told me it was a male Euphydryas colon, the Snowberry Checkerspot. That species is not even listed in my field guide! What gives?

Turns out there are a lot of different populations and subspecies of the Variable Checkerspot, some of which may or may not be actually be distinct species of their own, depending on who you talk to. (And it doesn’t help that each one seems to have more than one common name. Euphydryas colon can also be called the Colon Checkerspot, and Euphydryas chalcedona can also be the Chalcedon Checkerspot. Argh!) So I wasn’t really wrong. Andy the tweeting lepidopterist says I need to buy a whole other butterfly book devoted solely to the many variations of the species found in the Cascades, but in the meantime I may just keep pestering him with my photos when I get stuck. In any case, butterflies are confusing, and I have a whole new diverse set of them to deal with now that I’ve moved to the other end of the continent.