When looking for wildlife in the snow, anything ectothermic is probably not high on your list. Imagine my surprise on my last couple walks to repeatedly come face-to-face with tiny spiders dangling at eye level. Who knew there were spiders active in winter? Eventually I found one motionless on the surface of the snow, and when I picked it up the warmth of my hand quickly revived it and started it running around on my fingers.

(Not an easy thing to photograph.) Shortly afterword I found an equally tiny larva of some sort, which I would guess had fallen out of a tree. It, too, perked up and started crawling inchworm-style across my hand. 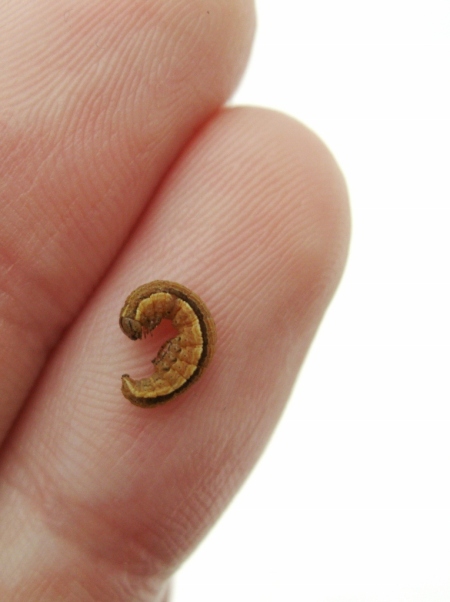 Bernd Heinrich’s Winter World, my go-to source of information about winter ecology, was no help on the spiders. However, he does talk quite a bit about geometrid moth caterpillars, and after a quick Google image search I think that could be the identity of my larva. They’re an important winter food source for Golden-crowned Kinglets.

The resilience of these little things is astounding. In warmer seasons I probably wouldn’t take any notice of a spider a centimeter long, but in winter it becomes something to marvel over.

One of the science teachers here currently has a couple petri dishes full of newly-hatched monarch caterpillars on his desk. “There are about sixty-five caterpillars in there,” he said, and never having seen newly hatched caterpillars before and therefore not realizing how INCREDIBLY TINY they are, I almost said “Where?”

Oh. There they are.

My coworkers have all figured out that I love looking at, photographing, and identifying interesting insects, so one evening this week one of them informed me about a really crazy-looking caterpillar that had been found crawling up the cistern. 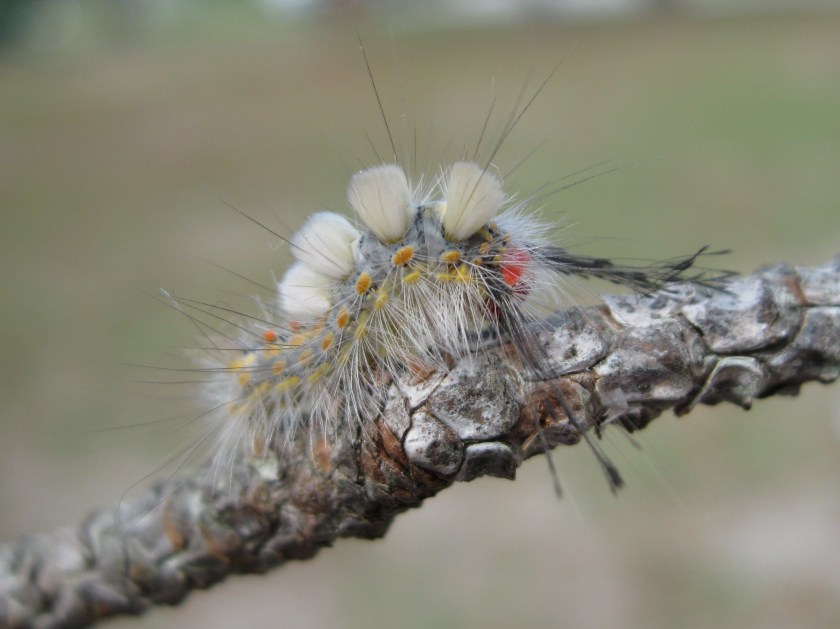 It’s a Fir Tussock Moth caterpillar, Orgyia detrita.  (A second, similar species, the White-marked Tussock Moth or Orgyia leucostigma, is more common in much of the country but lacks those orange markings along the side.  According to BugGuide, the Fir Tussock Moth is the more common of the two in Florida, and I’m only an hour or so north of the Florida border.)

Apparently tussock moth larvae can feed on a wide range of plants, to the point of being pests in some places.  Since we discovered this first one, we’ve suddenly started seeing them everywhere. 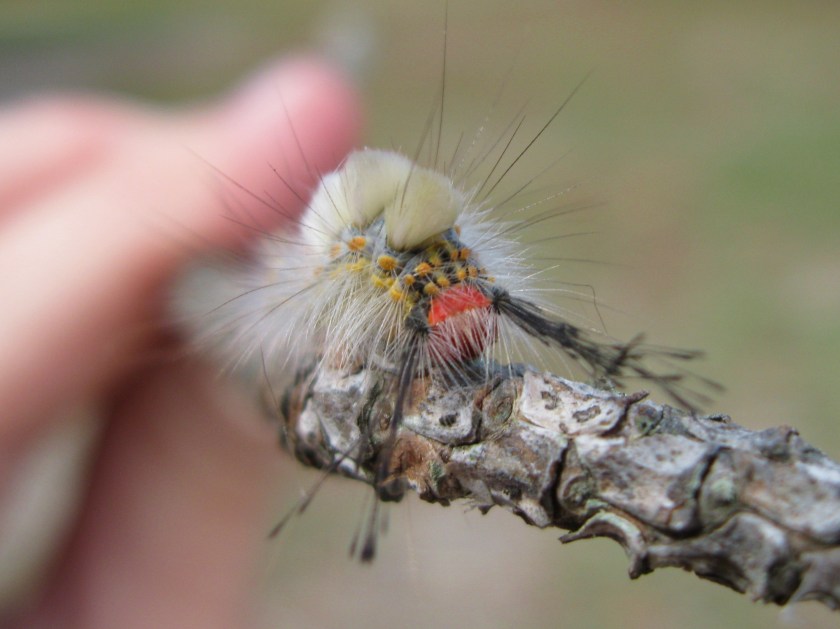 The adults are drab brown little things, but man, are these caterpillars crazy.  A red clown nose with long black antler-like tufts on either side, and those four white puffs down the back!  The eye-catching shapes and colors must be a warning, because BugGuide says those hairs can cause skin irritation; when I was taking pictures I was careful to keep it on the twig rather than letting it crawl up onto my hand.  Supposedly tussock moths are found in Ohio as well but I can’t remember ever seeing anything like this before.

This one is now tucked inside a container with a supply of fresh leaves, where one of my coworkers is hoping it will spin a cocoon, which would certainly be interesting.  If it happens I’ll post more pictures.

EDIT: Oh, I nearly forgot – congratulations to the winners of the plover ID challenge.  Anne McCormack got that the first one was a Wilson’s Plover right away, and Hannah Brewster finally nailed down that the second was a Piping Plover.  Hannah is a former coworker of mine from the environmental education center in Ohio where I worked when I first started this blog, and seeing a comment from her was a pleasant surprise.