This week I visited Chiricahua National Monument, one of the most drooled-over birding destinations in the U.S., for the first time.  I added four species to my life list – Mexican Jay, Yellow-eyed Junco, Black-throated Gray Warbler, and Arizona Woodpecker. 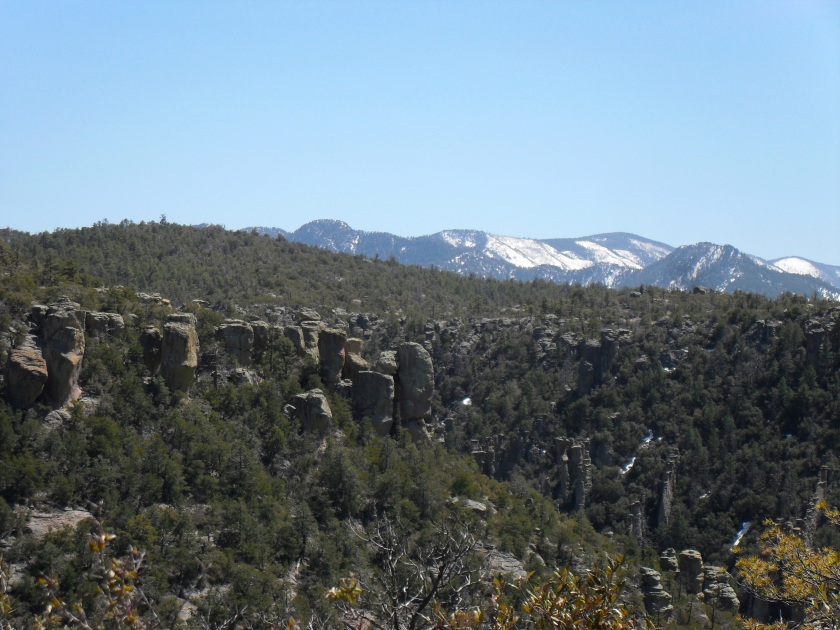 A real, hardcore birding reading this would probably be thinking, “This was your first visit to the Chiricahuas and you only bagged four new birds?  And one of them was the Black-throated Gray Warbler?  What the heck is wrong with you?  Why do you even bother keeping a life list?”

Well, I’ve gone birding with those hardcore types before.  Piffle on them.  I have accepted the fact that I will never be a twitcher, never sweat over lists for separate states and years, never be what some would call “serious.”  Who wants to be serious?  I bird because it’s fun.  And yes, I keep a life list, a simple numbered list of the species I’ve seen, even though I sometimes get busy and go weeks or even months at a time without picking up my binoculars.  And even though I may not go on weekend-long road trips with the sole objective of tracking down rarities, I have experienced the high of the life bird moment.  There is nothing that quite equals the moment when you finally see a really spectacular life bird that you’ve been daydreaming about for a long time.

The first thing I do when birding in a new place is pick up a species checklist, assuming there’s one available (and for units of the national park system, there almost always is).  I skim the list and start to salivate at the names of species that so far, for me, only exist as illustrations in a field guide.  Maybe today will be the day when I finally see a Bridled Titmouse!  Or a Zone-tailed Hawk!  Or maybe not.

We were on our last hike in the Chiricahuas.  So far I’d seen the Mexican Jays, which it would have been impossible to avoid seeing, since like most jays they congregated at picnic areas; the Black-throated Gray Warblers, which are a widespread western species that I’d just never happened to see before, hardly a southeast Arizona specialty; and I’d had one fleeting and unsatisfactory glimpse of a Yellow-eyed Junco.  I really wanted that Arizona Woodpecker, darn it, and I knew that this hike was my last chance for the foreseeable future.  Finally I decided to turn back early so that I could walk by myself for a little bit while my parents, who I was with, went on to the end of the trail without me.  I knew that I might have a better chance of seeing things alone, walking quietly and at my own pace.

A few minutes back down the trail, I heard the sound of tapping from the trees ahead.  A woodpecker!  I started praying silently to the gods of bird sightings.  Please let it be an Arizona Woodpecker.  And if it’s not, please let it at least be something mildly interesting like an Acorn Woodpecker, not just a Downy.  And if it’s not even woodpecker at all, if it’s a nuthatch or something, at least let it be a Pygmy Nuthatch, because if it’s another White-breated Nuthatch I may scream.

I rounded the bend and there, right at eye level on the trunk of a tree maybe twenty feet in front of me, was a female Arizona Woodpecker.

“Yes, yes, yes!” I whispered as I raised my binoculars to my eyes.

It was a life bird moment.