I’m baaaaack. My goal is going to be one post a week through the end of the summer. For my first post back from hiatus, I have something special for y’all: giant purple alien flowers that smell like rotting flesh!

While moving my stuff into the house in Walla Walla (yep, no more rural Oregon), I noticed the unmistakable smell of death. Some small animal had clearly crawled into the bushes, died, and was decomposing. We poked around a bit but couldn’t find the culprit so we didn’t think much more about it for the time being.

Not until the next day did we make the connection between the smell and the enormous alien flowers that were blooming in the yard. 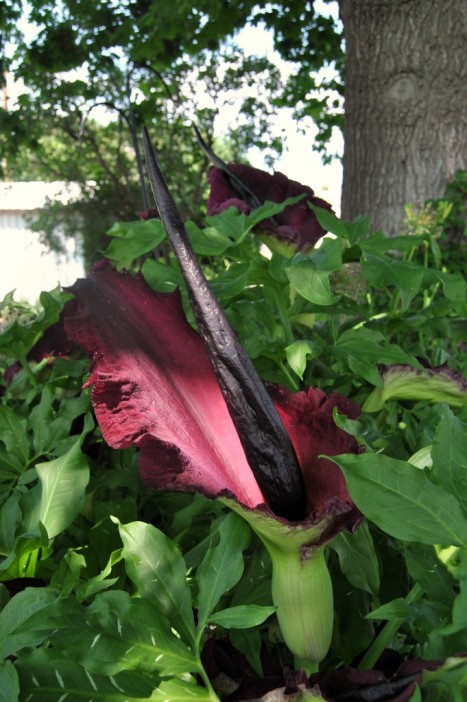 These things are wild. We’d been watching them grow all spring without being sure what they were; they started as tentacle-like spikes sprouting from the ground, then developed the pretty green-and-white striped foliage you can see in the picture, and finally grew enormous two-foot-long buds like alien pod things.

Then the buds opened into spectacular, death-scented flowers.

Turns out that this plant, Dracunculus vulgaris, is native to the Balkans and has variety of expressive common names like Voodoo Lily and Black Dragon. It is (of course) pollinated by flies, which it attracts by mimicking the color and smell of a rotting corpse. In fact, there was a cloud of flies buzzing around the flowers when I was taking photos, although I had trouble getting one in focus. 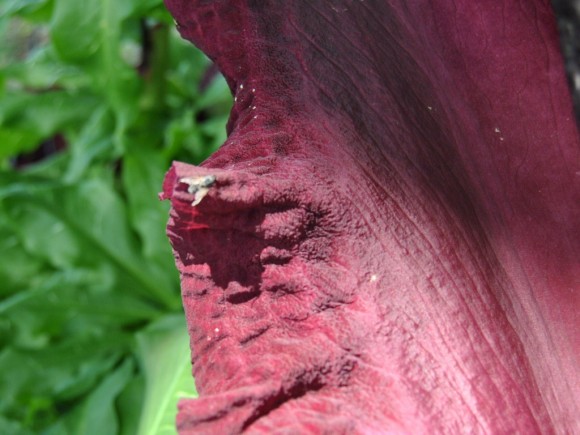 The first spring in a new house, when you don’t really know what sort of plants are in the landscaping and every new thing that sprouts is a mystery to solve, is a lot of fun. According to the internet, the rotting flesh smell of our Voodoo Lilies should only last a couple days. We like our weird purple alien death flowers and can’t wait to see what strange thing appears in our garden next.

3 replies on “I’m Back, and I Come Bearing Purple Death Flowers”

Great to have you back….your offering is questionable….but very interesting!!

lol, “Welcome to the neighborhood!”

Reblogged this on Botanical and commented:
I’m in a bit of a blog hiatus myself but meanwhile here’s something amazing I’ve never seen before…The Voodoo Lily. Lx