We have a long list of native conifers here: red, white, and jack pine, black and white spruce, balsam fir, eastern hemlock, eastern red cedar, and… tamarack. Tamarack is different. Tamarack is the only one that does this. 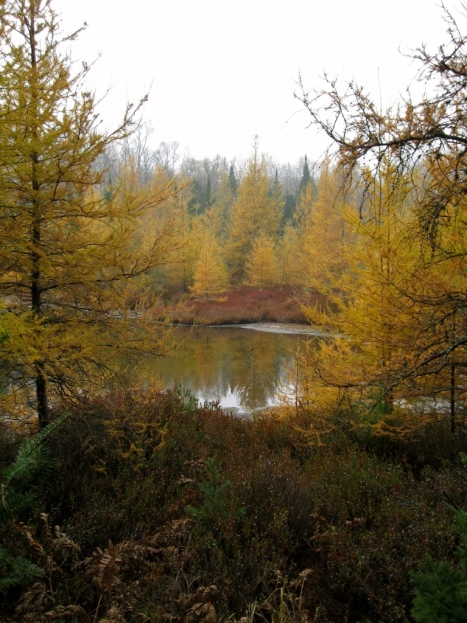 I really like tamaracks. I’ve written about them before. I keep wondering about them, though. Why are they deciduous, losing their needles every autumn, while every other species of conifer found here is evergreen? Things like this usually don’t just happen at random – there must be some of sort of adaptive advantage to shedding their needles, right?

Boreal forests are mostly dominated by evergreens. Keeping your needles year-round cuts down on the amount of nutrients you need (you don’t need to manufacture new leaves as often) and lets you photosynthesize during the winter, instead of relying on the short northern growing season. So why are tamaracks and other larches among the most successful boreal trees of all, growing far north of the Arctic Circle? Some Googling led me to a 1990 paper on the subject by S.T. Gower and J.H. Richards.

According to the paper, the longer a leaf lives, the lower its photosynthetic rate: individual tamarack needles don’t live as long as those of evergreen conifers but they can photosynthesize like crazy in the long days of the northern summer. What’s more, since tamarack needles don’t have to survive the cold, dry conditions of winter, tamaracks don’t have to invest nutrients in constructing thick protective cuticles them. Ever stroke the foliage of a tamarack? It’s very soft. Tamaracks still get the advantages of having a conifers’ needles-shaped leaves and cone-shaped canopy, though, so they can compete where spreading, broad-leaved deciduous trees like maples and birches can’t. (Among other things, being cone-shaped helps conifers get the maximize their access to sunlight.)

Everything in nature is a trade-off. I still have a zoology department t-shirt from my undergraduate days featuring a drawing of a giraffe bending down to drink captioned with the words “Life is a Compromise.” Tamaracks are a compromise between two different tree lifestyles, and it must work well for them, because they thrive in some of the harshest environments around.

5 thoughts on “The Strange Tale of the Deciduous Conifer”