Once again it’s time to learn along with me as I muddle my way through dragonfly identification. Last time I introduced you to the skimmers, the biggest and most diverse dragonfly family. Besides the skimmers, though, there is one family that stands out as being particularly common where I live.

I have good news and bad news about clubtails. The good news is, there’s a single, easy-to-spot trait that is shared by all members of this family and will help you instantly recognize its members.

Their eyes don’t touch. At all. They are spaced widely apart on the head. There is one other family of dragonflies like this, the Petaltails, but luckily for me there are no petaltails in my neck of the woods (those living in other parts of North America may want to be on the lookout for Gray Petaltails in the east and Black Petaltails in the west, and they’re on other continents, too). Damselflies’ eyes are separated, too, so make sure you know how to recognize a damselfly when you see one.

Now for the bad news about clubtails: though easy to identify to family, they can be (at least for me) very hard to identify to species. That one above is something in the genus Gomphus, probably either an Ashy or a Dusky Clubtail, but when I posted the photo on BugGuide I was told that to positively identify it I would need to catch it and look at “the shape of the subgenital plates.” I think I’ll pass.

Luckily not all of them are so cryptic. Here is a Black-shouldered Spinylegs, Dromogomphus spinosus. 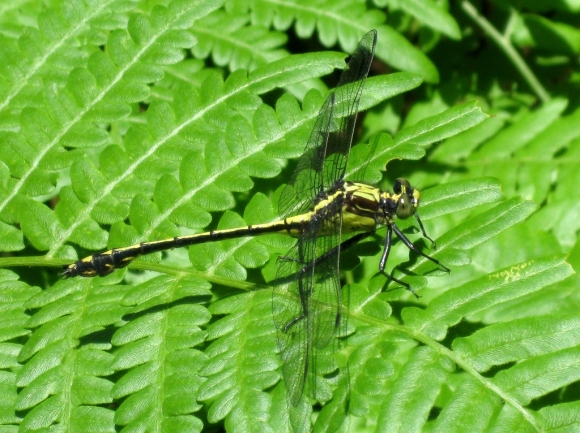 This is a male, and it’s showing the characteristic that gives clubtails their name: in a lot of species in this family, the male’s abdomen is tipped with a swollen “club.” Beware, though. Not all male clubtails have this, and none of the females do. Here’s a female Lancet Clubtail, Gomphus exilis, with a clubless abdomen.

So there you have it. Next time you’re out on a walk with your friends and you notice a dragonfly with widely spaced eyes and a fat-tipped tail, you can sound very smart by saying “Aha, look, a clubtail!”

3 replies on “Know Your Dragonflies, Part 2: The Clubtails”

Great post. It is very informative, however, I am a fellow entomologist and I recently took some photos of these dragonflies.

Cool! Glad you found it useful!

These are great guides–and I love how the dragonflies never want to cooperate with their ID rules, hahaha.