Everyone has been talking about the “supermoon” last night, but just in case you’ve been living under a rock, let me break it down for you: last night’s full moon happened to coincide with perigee, the point during the moon’s monthly orbit at which it’s closest to Earth.  This happens fairly infrequently, and when it does the full moon looks a little larger than normal.  (Contrary to what you might have heard, however, there is no evidence linking so-called supermoons with major natural disasters like what happened in Japan last week.)  Wikipedia has a good article on the subject, including an image comparing the size of last night’s moon with that of a more typical full moon; it’s not really that much bigger, and I think most people who were astounded by the huge moon last night probably just aren’t in the habit of watching the full moon rise on a regular basis.  While the moon did look impressively big and orange last night, it wasn’t particularly bigger or oranger than other full moons I’ve seen when they’re just rising above the horizon.

However, the real story here… is the supertide.

The most extreme tides every month, called spring tides, happen immediately following the new moon and full moon, when the Earth, moon, and sun are all in a line.  I wrote about spring and neap tides previously in this post.  When this happens at the same time as perigee, like it did today, the effect is even greater and the tides become truly crazy.  I didn’t see the beach at high tide this morning, but I was back on the marsh side of the island and was shocked to see practically the entire marsh flooded, the tidal creeks about to bust out of their banks.  So six hours later I made sure to hustle down to the beach to see the opposite end of the spectrum, the ridiculously low tide, exposing areas of sea floor that probably hadn’t been above water for a long time.

The water’s edge revealed supersaturated sand that sucked at my feet as I tried to walk, interspersed with deposits of rich black mud.  And in the sand were some interesting critters, like these sea squirts, which pulsed gently as I watched (my hand is for scale)…

…and this odd lump of mostly-buried material.  Little currents coming out of it suggested something living, but what, and where?  In it?  Under it?  What was this thing?

Finally I gently grasped its edge and flipped it over, then jumped back in shock.  It was an enormous whelk, alive and wiggling, its shell so encrusted that I hadn’t even recognized its shape! 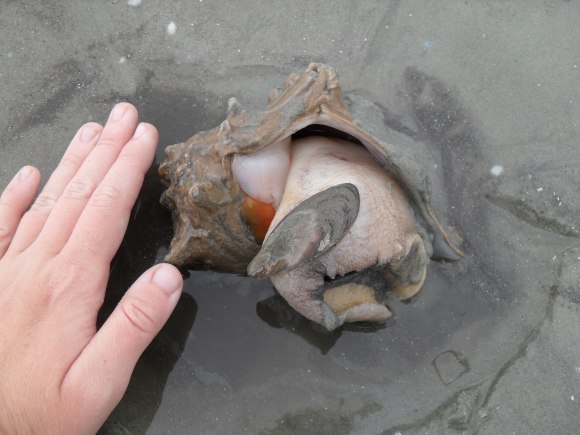 I was going to take more photos, including some wide shots of the whole beach to try to give you a better sense of the craziness of the low tide, but my camera chose this moment to jam up and stop working.  And of course, it was after my camera went bust that I found the dead dolphin.  TO BE CONTINUED…

Live shells are so much more interesting than dead ones, aren’t they? Even when the shells themselves are gorgeous, seeing the live animal gives an extra frisson of pleasure.