This spiraling structure is a fairly common find on our beach. 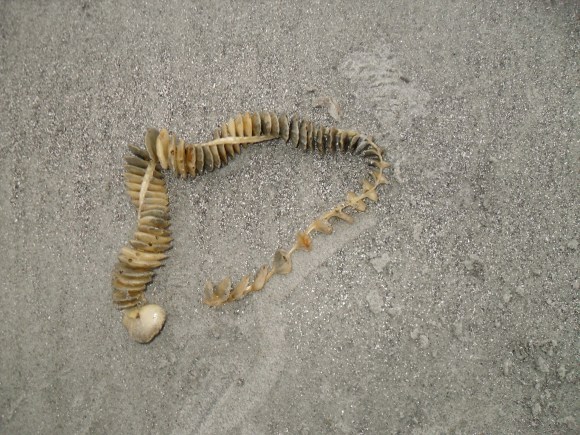 Kids see this and immediately recognize it: the skeleton of an exotic sea snake!  These round rubbery things with the frilly edges, though… 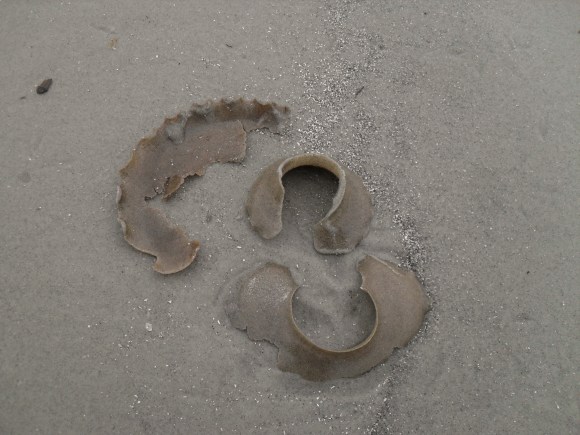 …these are harder to identify.  If a kid picks one up and asks me what it is, I’ll have them carry it for a bit so I can talk to the whole group about it the next time we stop.

The first photo, in case you haven’t guessed, actually has nothing to do with snakes.  It’s the egg case of a whelk, which some people apparently call a “mermaid’s necklace.”  The second one is the egg mass of a moon snail, which is commonly referred to as a “sand collar,” because whole ones resemble old-fashioned detachable shirt collars.  To make a sand collar, the female moon snail cements grains of sand together with mucous, embedding her tiny eggs in the matrix.  Which means that, after making the kid who picked it up carry it for several minutes, I get to wind up my explanation with “…so basically you’re holding snail snot” and see the look on their face.

My kids would love it! Great post title by the way- I HAD to check it out.

I found something like this on the beach at Ormond Beach Fla. when I was a kid. I finally found out it was an egg case, but this is the first time I’ve learned what kind of egg case. So cool!

Ah, thanks so much for answering a long-held question! I never wanted to pick up the snail snot, even when I didn’t know what it was. Nothing like a little hands-on experience to make information stick, though!

Great work with kids. There is just so much to see and do on that wonderful area. Any Wilson’s Plovers lately?